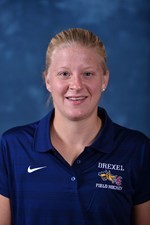 Danica Deckard enters her fourth season at Drexel as an assistant field hockey coach in 2018. She joined the Drexel field hockey staff as an assistant coach in the summer of 2015 under head coach Denise Zelenak. She recently served as the Head of Video Analysis for the U.S. Over-40 Women’s Masters Team on a trip to Germany.

Before Drexel, Deckard served as the graduate assistant coach at Temple University from August 2013 through May 2015 where she also obtained a master’s degree in sport business.

She went on to play at Ohio State University where she was a captain her senior year as well as being named to the 2012 NFHCA All-Region First Team, a Two-Time All-Big Ten second team selection, NFHCA All-Region Second Team selection, and a 2012 NFHCA Senior All-Star game participant. She was also a part of the 2011 Big Ten Regular Season Championship as well as making an appearance in the 2011 NCAA Final Four. In the classroom, Deckard was a two-time NFHCA National Academic honoree, a three-time Academic All-Big Ten selection and a four-time Ohio State Scholar-Athlete. She received a bachelor’s degree in sport and leisure studies in May 2013.

She then went on to become the Graduate Assistant coach at Temple University where she graduate with a degree in Sports Business.